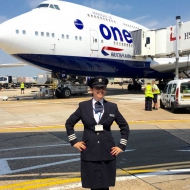 Unsure what to ask? Why not ask one of the questions on our inspiration list?
Senior First Officer

A320 First Officer at British Airways

A320 first Officer at Tiger Airways, Singapore. After gaining experience at Easyjet on a temporary contract I was able to apply for permanent roles throughout the world. I was successful in gaining a position to fly the Airbus A320 as a First Officer in Singapore.

After gaining initial experience at Easyjet I spent the next 18months developing my skills as a First Officer and enjoyed living in Singapore and travelling around South East Asia.

My first pilot role as an A320 first Officer at Easyjet airline. I flew with a Captain from London Gatwick Airport to multiple destinations in the UK and Europe.

A First Officer sits in the right-hand seat of the flight deck of an aircraft. I was qualified to fly an Airbus A320 at the end of my commercial flight training. All flights originated from London Gatwick and each day I would report to work and meet the Captain of the aircraft and the cabin crew. We would board 35mins before the first flight departed and spend the day carrying customers to their destinations. Most days were made up of flying to and from at least two destinations Gatwick - Rome - Gatwick - Amsterdam - Gatwick. Or sometimes we went further afield such as Gatwick - Tenerife - Gatwick. A pilot's role is primarily safety, to ensure that we plan for weather and take enough fuel and fly safely from airport to airport. Over time as you become more experienced you begin to take on more decisions but in the early days the Captain will spend a lot of time helping you learn and develop your skills.

I spent 3 summers working at a children’s camp in America as a lifeguard, head of pool and finally, waterfront director.

My parents gave me the confidence as a youngster to consider any dream achievable. When I had my first flying lesson at 16 I was hooked. I went to university and joined the air squadron (RAF reserves) and started to learn how to fly. Upon finishing university I applied to join a training program for pilots and was successful. This took 18months and I started my first airline job in April 2009. I have now been flying for nearly 12 years and am married with a 3 year old daughter. I absolutely love my job and the life that comes with it!

Good grades in the core GCSE subjects is vital. You don’t have to rush your career decisions, instead invest in yourself and get good grades in maths, English and science in order to keep your options open!

I didn't know what I wanted to do this at school I decided to look into the role of a pilot when I was starting to do career research around the age of 16/17.

Although not vital I wish I had done more maths education at A-Level.

Go to my LinkedIn